THE STORY BEHIND TOTAL FUTBOL ACADEMY!!

Who is Paul Walker? Today Paul Walker is immersed and well respected in the world of American youth soccer and is the President of Total Futbol Academy (TFA), but when he was growing up in Los Angeles soccer was the furthest thing from his mind. The son of an Irish father and Latino mother, he was most likely found on the basketball court, where he was a star player for many years.

“I never played soccer,” Walker admitted to Diane Scavuzzo of SoccerNation News. “It wasn’t really part of my generation.”

That all changed as an adult when his passion for the world's beautiful game grew exponentially. In 1999, Walker organized the L.A. FC Barcelona Soccer Foundation to support one of the world’s ultimate professional soccer clubs and to provide a resource for youth soccer players in the Los Angeles area and beyond. With the creation of what was then Barcelona USA– now Total Futbol Academy – Walker set out to give the top elite youth soccer kids the chance to develop their skills and to possibly provide a road map to playing college soccer or a career as a professional player.

Walker chose to follow his dream of pioneering a new path in the world of youth soccer by forming a powerful association with FC Barcelona. As an official FCB “Supporters Club” (Official FCB Penya #1437), Walker’s club gained access to a wealth of resources from the Spanish giant. So famous, Barça, as the professional football club is often referred to is based in Barcelona, Catalonia, Spain and was founded in 1899.

In the soccer world, even the name Barcelona inspires greatness and Walker's official relationship with the prestigious giant provided access to the club's successful philosophy of “total fútbol.”  Another advantage of this relationship has been the opportunity to train every year in the TFA Coaches Mentoring Program established and based in Barcelona, Spain.

“We wanted to support the best professional soccer club in the world,” Walker explained. “We also wanted to gain access to their player development strategies and methodology. The concept of ‘Total Futbol’ is what we have been learning the whole time.”

This was an intelligent and successful business decision for Walker and the access has paid huge dividends for the club since the beginning.

The first year, Walker started with only four teams, but three of them took championships at the Cal South State Cup. Since then, the club has built a reputation for intense, high-level play and success on the pitch, but for Walker that success is a byproduct of the focus on “total fútbol.”

For Walker, “total fútbol,” as practiced at FC Barcelona and implemented at TFA, is the “Holy Grail” of player development. 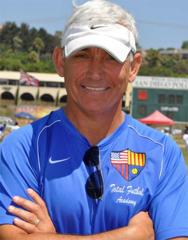 The key to successful player development is having a coaching staff that is well-trained in the philosophy. To that end, Walker and TFA annually send their coaches to train every year at the FC Barcelona facilities. It is important that coaches are as well-educated as possible, and he is very proud that his Academy coaches are at a very high level of knowledge.

The difference between a good coach and a great coach, according to Walker, is desire – “His desire to gain knowledge by studying different coaching philosophies, his relentless pursuit in his own personal development and his ability to teach.” By building on this desire, TFA coaches take their players to another level.

At most youth clubs, each coach has their own philosophy. One of the reasons Walker feels TFA is so successful is that it has a singular philosophy on player development and game-day strategy, and this provides an easy and fluid transition for the players as they age in the academy. He believes they have a true philosophy on how to develop players and a system of play with specific building blocks that are the hallmarks of success

The result of this focus has been more than just the on-field power that opponents have had to face over the years. Paul Walker’s teams have reached a level where they consistently win at a very high level, but that is a result of the focus on player development. For Walker, it’s not about bringing home trophies, but about developing players to their highest potential through “total fútbol.” 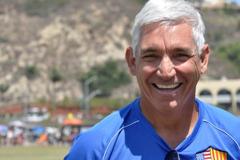 Walker knows that a player's talent is an important piece of the puzzle – but intelligence and proper player development are required for success in today’s competitive youth soccer world. Asked how an “average” player is different from a college-bound or professional player, Walker explained that it is the ability to make decisions on the field; it all comes down to intelligence. Through the “total fútbol” system, intelligence and decision-making ability are nurtured and developed in players.

Walker is also known for identifying top performing youth soccer players. One shining example of that came on April 14, 2011, when then-ten-year-old Ben Lederman was signed by FC Barcelona’s Academy, making him their first ever American-born player. Lederman is a highly talented youth who came to Barça’s attention as part of the L.A. club’s team that traveled to Barcelona to train and compete in April 2010. Walker is proud to have been a part of Lederman’s awesome opportunity.

Exploring the wide world of youth soccer: Walker believes that international travel is one of the elements of the TFA program that helps all players to grow both personally and athletically. Starting in the Spring of 2010 the Club began taking their BU10 Academy teams to compete against FC Barcelona's Academy at their La Masia facility. This has been one of the greatest experiences in their lives for many of the young athletes of TFA. In 2014 the club will expand their reach when a select group of 2002's players will visit and train in England at Manchester City before going on to compete at the 2014 Edition of the MIC Cup.

Recently the club had a successful run at the 2013 Mediterranean International Cup (MIC), a premier youth soccer tournament in Spain. Playing in the U11 division, the TFA team faced eventual champions FC Barcelona Academy, playing them to a draw – the only team to manage the feat in the tournament. The team had a strong run, defeating the storied Dutch Ajax Youth Academy to reach the tournament semi-final round. The high level of play shown by the TFA side attracted attention and positive comments from all the top youth academies at the tournament. 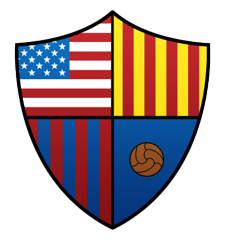 “International travel is important for young players to gain international recognition,” said Walker. “It helps them to mature as young soccer players and allows them to be exposed to cultures they’ve never seen before. Finally it helps to remove the cloud of uncertainty in terms of their ability to compete at the highest international levels.”

"Our annual trips to Barcelona, Spain take place every year in the Spring and Clubs, teams, coaches, parents, family, friends and Fan Club members are welcome to come along. The 2014 Edition will be held from: April 3rd - April 11th and reservations are currently underway," said Walker. For more information on this trip, click here.

Fourteen years ago, when Walker founded the club, he was determined to build strong and competitive teams. Looking back, he never would have imagined that his efforts would be as successful as they have been. While the Club began as Barcelona USA, it has never been nor meant to be an official "Escola" of FC Barcelona. Walker did work directly with Barcelona's youth academy and even imported his youth uniforms - known as kits -  from the La Liga giant. As an official Supporters Club, they were able to operate under the Barca flag until Walker felt ready to launch Total Futbol Academy.

Walker’s goal was to eventually develop the club’s own “brand” to play under. With their status as a Penya, there was no need to rename the club, but, as Walker explained, “There is only one Barca in the world and now that our Club was being showcased on a grand stage in front of many of the biggest International Academies of the world, including Barca's, it was important to have our own identity that all the rest could identify with."

What inspired Walker when he started? “It’s important for me to make a difference in the lives of kids, especially underprivileged kids who would never have had the same opportunities I had as an athlete,” said Walker. Dedicated to providing an option to the pay-to-play system for elite players, Walker sees it as his responsibility to fund the academy, which he says costs a minimum of $30,000 per team without international travel costs.

Today Walker's soccer club has over 250 players and 14 highly-trained coaches, and the academy side has five teams with four coaches. Their success is well known and respected in the the fields of youth soccer. No less a youth soccer authority than San Diego Soccer Club coach and SoccerNationNews columnist John Napier called the 2012 BU12 team “the most talented BU12 team in the nation.”

Please note: For more information on the upcoming trip to Barcelona, Spain or if you would like to possibly participate,  please contact Paul Walker.